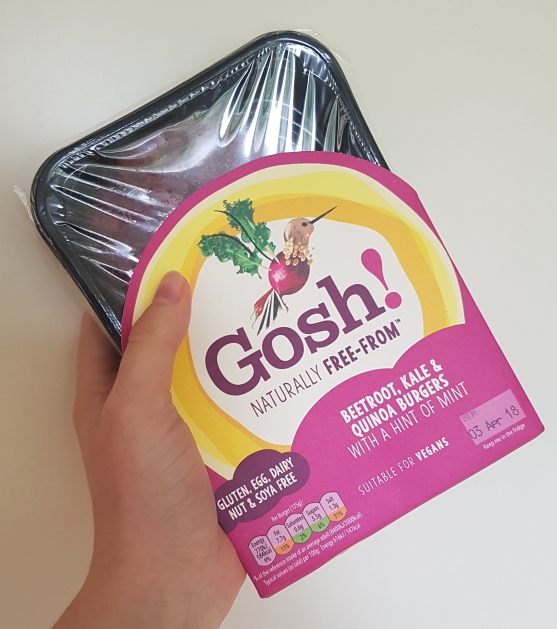 We just had a heatwave here in the UK which obviously meant every fucker and his mother had their tops off, beers cooling, and BBQs out.

We’ve already covered a lot of burgers and sausages since we started JFP, but it seems like 2018 is the Year of the Vegan because you can’t go up the shops without another goddamn veggie burger staring at you from the Free From fridge.

Ryan is a man who likes his burgers busting with veggies and beans. I myself prefer a dirty, greasy, fake-meaty burger that makes my arteries get a little worried. So we really didn’t know which one of us should review this burger from Gosh considering it looks like a meat patty… but it definitely does not claim to be trying to emulate any form of mashed up animal (yum yum).

I stepped up and took the beetroot burger bullet, hoping and praying that it wouldn’t be as shit as most other “healthy” burgers that I’ve subjected myself to. 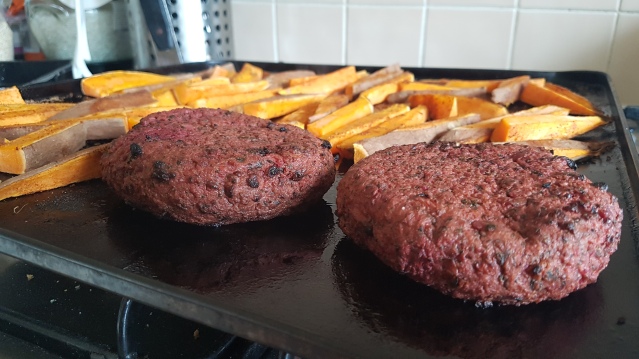 Stage one: remove from packaging. So far so good… it looks kinda like a meaty burger because of the pink from the beetroot and the squishy-but-nubbly texture (why don’t I work in marketing? It’s honestly a mystery).

Let’s be fucking clear: that’s where the likeness to a good honest burger ends.

Even before cooking these little pink lumps the smell of mint is over-fucking-powering. It kinda took me back to when my dad would buy “gourmet” burgers from Waitrose (because we are painfully middle-class) that were made with lamb and rammed with spices to make them distinct from your bog-standard poor-people quarter-pounders.

Totally echoing Ryan’s rant in his last post here – but they took TWENTY MINUTES to cook in the oven. TWENTY. And there’s no quick option to fry them or stick them on a BBQ (because you’d be stood there like a goddamn fool watching your burger disintegrate between the grill and into the fucking flames thank to their crap structural integrity). So you have to sit and suffer waiting by the oven, only to be cripplingly disappointed when they aren’t even fucking cooked through after the full time. 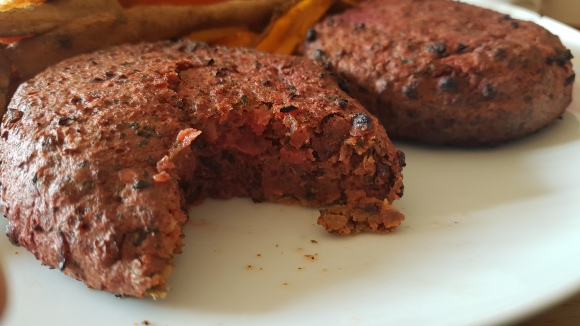 If these burgers were made of meat, they’d be a fucking health hazard. Or, in the eternal words of Gordon Ramsay:

This was so gross to eat. It had a bizarre dry shell which barely held together the completely soggy inside. Irritatingly, they actually tasted quite nice. Mint is the dominant flavour so it would be better with some kind of yoghurt dip rather than ketchup, which is just way to bougie for a basic BBQ in my opinion.

It wouldn’t matter if this was the best bizarro mint burger I had ever put in my mouth, because the texture was so disgusting I would struggle to bring myself to get over that for the flavour alone. Honestly, think raw minced meat. Yeah. Not exactly going to appeal to the vegan demographic, is it…

Let’s rate this fucking catastrophe, shall we?

Find this product at: most supermarkets (but please do yourself a favour and leave it there)