MORE cold cuts! Chorizo slices this week because 1- I’ve never seen these on the shelves before and 2- apparently seitan is some kinda mega protein and actually real good for vegans. If you were gonna choose this chorizo for your seitanic needs though, just don’t. The fact it’s £2.50 for like 5 THIN bitch slices of what is, at best, a sandwich filler already puts it fairly low down my list. 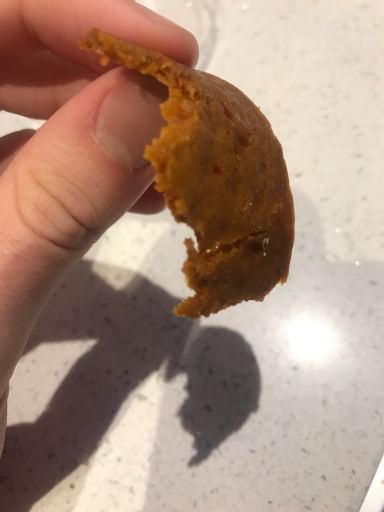 Every time I’ve tried seitan, it’s always the same damn thing. I don’t know if I’m doing it wrong or if seitan is just not for me but I’ve always found it’s… soggy. It’s wet, it’s floppy and usually a bit chunky kinda like what damp bread feels like. This is essentially what Wheaty are offering. The slices are a little leathery (think like thin steak slice, not grandma’s purse) which does add a fair bit of texture, but other than that they’re kind of oily and very sloppy to handle… Which isn’t that far off from real chorizo I guess. It doesn’t suffer from feeling plastic like some other companies but it’s very clearly reconstituted bits and closer to dirt cheap abattoir salami than chorizo.

The main thing with chorizo is obviously the spice. It’s got a lil heat, a lil chilli oil a lil flavour, it’s pretty on point. Other than that though, there’s not really much there for flavour. Just a few drops of tobasco on a cheap wheat gluten discs, not worth the money and definitely not worth that “greasy mouth” aftertaste you get from a bad Chinese. 2/10, would not recommend.

Would I buy this again? Um, probably not. The price is one thing, the mouthful of nasty chip fat after is another and then the fact that there’s just not anything special about it all means it’s a no. And to answer the qualifying question, does this pass for real chorizo? Feck no.

Find this product at: Planet Organic, Whole Foods, Ocado and other health stores