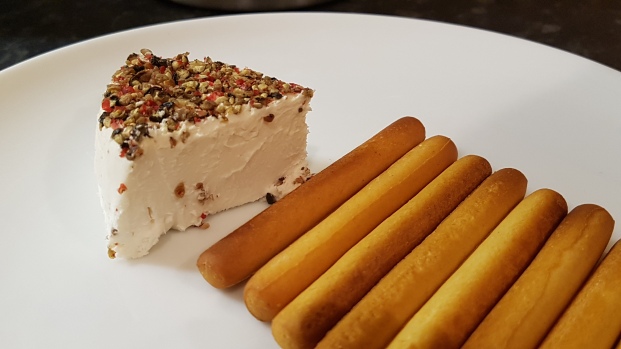 Do you want to try a cheese that will punch you square in the fucking face? No? Me either. But I did. Because SCIENCE. And also because it is the latest addition to the free-from coconut alternative cheese range at Tesco, so how could I refuse?

This is a different cheese than the ones we have come to know and love (or hate… the jury seems to be hung on Tesco cheese). It is much softer, creamier, and a little bit wetter than the cheddar or blue block cheeses that Tesco has to offer. It reminds me a hell of a lot of goats cheese, but without the offensive sour tang that I used to fucking despise.

The cheese itself has a nice peppery undertone but HOLY MOTHER OF GOD the peppercorn crust will kick you in the teeth and spit in your bleeding mouth. It is so ridiculously intensely peppery I can only imagine that the food techs of Tesco sat in a room and said “let’s fuck em up”. The worst part is the crust is at the BOTTOM of the packet… hidden… waiting… ready to strike.

I won’t lie to ya, I manhandled my cheese. I grabbed that fucker and scraped off as much of the godforsaken crust as I could. Only then did I actually get to enjoy it without fear of my tongue being turned to ash.

This is one of those things you would buy if you were putting together some fancy-ass cheeseboard at a dinner party you’re hosting to fool yourself and your friends into thinking you’re some sort of upper-class twat.

I think the fuck not. There are peppercorns in my teeth that will be there til I die.

However, I will say that despite the satanic crust the cheese itself is top notch. It would be awesome if Tesco released a range of new cheeses based on this style to add a bit more variety to their already kick-ass free from aisle. It’s one of the few cheeses on their shelves that I would confidently say you could feed an omni with next to no complaints or comments about “real cheese” (seriously, fucking spare me).

So, it’s a bit of a tough one to score this week, so I’m gonna go on the average of how impressive the cheese is and how much peppercorn related regret I have.

Find this product at: Tesco