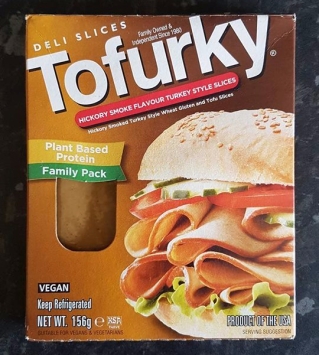 I was so not thrilled about trying these turkey style slices after Ryan’s Tofurky trainwreck a few blog posts ago with their artisan sausages, and I was even less thrilled when I opened the box to find what looked like a vacuum-packed breast implant reject, but good god damn am I glad I took out a small business loan to purchase this pack of vegan witchcraft. Seriously, this pack cost me roughly £3 at Holland and Barrett and it only lasted for two sandwiches.

Disclaimer: Yes I bought a “family pack”. Yes I ate the whole thing in 2 sittings. I did not come here to be judged so just read the damn post and piss off with your calorie counting, Sharon. 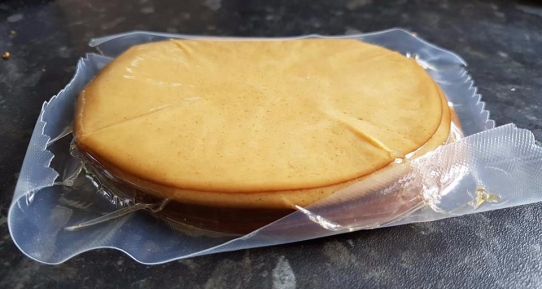 Everybody knows the only way to make a decent sandwich is to load that fucker up with as much filling as is physically possible. If your sandwich is over 60% bread then get the fuck out. To test these deli slices I shoved half a pack of the wafer-thin bastards in between two slices of granary loaf (granary loaf is the tits and I will fight you), slathered on at least two tablespoons of cranberry sauce (festive AF I don’t care that it’s July) and finished it off with a fistful of green leafy shit (because NUTRIENTS).

Fuck me for being so prejudiced against Tofurky. These turkey style slices are a GAME CHANGER. Honestly, they taste perfect and the fact that Tofurky go the extra mile and actually smoke their vegan meats over hickory chips instead of just using liquid smoke makes a world of difference because the flavour is second to none.

I took a slice aside while making my sandwich to see if it was still as tasty on its own. It tears like meat, which may put some hardcore vegans off… but if that’s the case just don’t tear the slices – it ain’t rocket science. They have a great smokey smell to them which was really unexpected. I was anticipating some rubber-scented bullshit, because too often it seems like not wanting to kill animals means being subjected to Goodyear Tyres’ scraps reformed into a limp slice of sadness.

I feel like I could’ve given an omni a bite of my sandwich and they probably wouldn’t question a damn thing. Obviously these aren’t supposed to emulate big thick cuts of turkey left over from a roast dinner… but as a contender for wafer thin sandwich slices these are seriously giving the meaty alternative a run for its money.

Tofurky, I apologise for previously being a judgemental dick. That was the best damn sandwich I’ve eaten since going vegan.

Find this product at: Holland and Barrett, independent alternative food stores, and online.